This weekend I had some time to play with the new Flutter UI framework by Google.

On paper it sounds great!

According to the docs, high performance is to be expected:

But what about CPU utilization?

TL;DR: Not as good as native. And you have to do it right:

I built a simple stopwatch app in Flutter and profiled it to analyze CPU and memory usage. 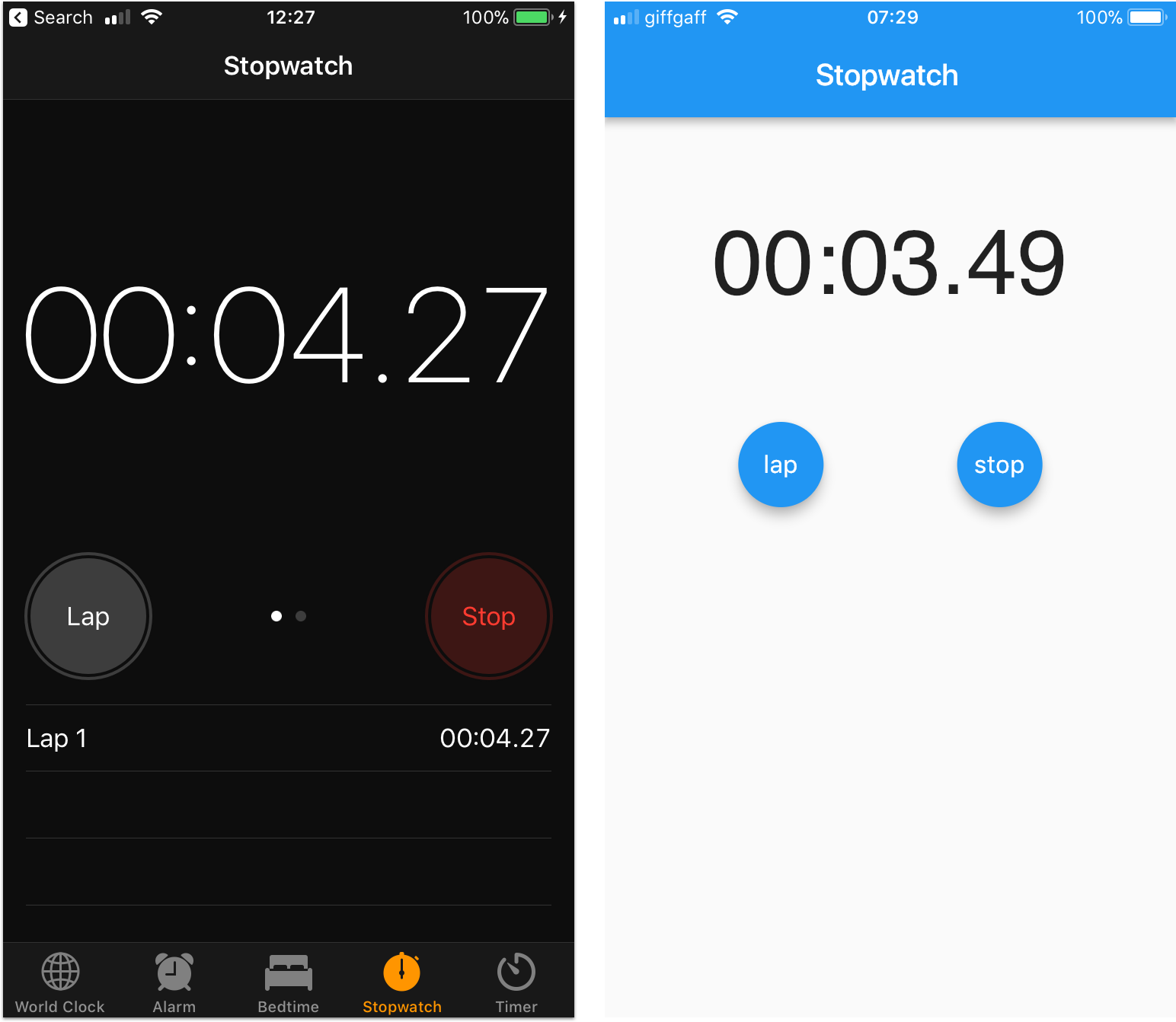 The UI is driven by two objects: a stopwatch and a timer.

How does this work?

A couple of notes:

When I first built this app, I was managing all the state and UI in the TimerPage class, which included both the stopwatch and the timer.

This meant that each time the timer callback was fired, the entire UI was re-built. This is redundant and inefficient: only the Text object containing the elapsed time should be redrawn - especially as the timer fires every 30ms.

This becomes apparent if we consider the un-optimised and optimised widget tree hierarchies:

Creating a separate TimerText class to encapsulate the timer logic is the way to go.

The Flutter docs state that the platform is optimised for fast allocation:

Perhaps rebuilding a widget tree doesn’t count as “small, short-lived allocation”. In practice, my code optimisations resulted in a lower CPU and memory usage (see below).

Since publishing this article, some Google engineers took notice and kindly contributed with some further optimisations. 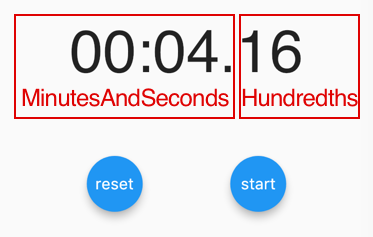 These register themselves as listeners to the timer callback, and only redraw when their state changes. This further optimises performance as only the Hundreds widget now renders every 30ms.

I ran the app in release mode (flutter run --release):

I monitored CPU and memory usage in Xcode for 3 minutes, and measured the performance of the three different modes. 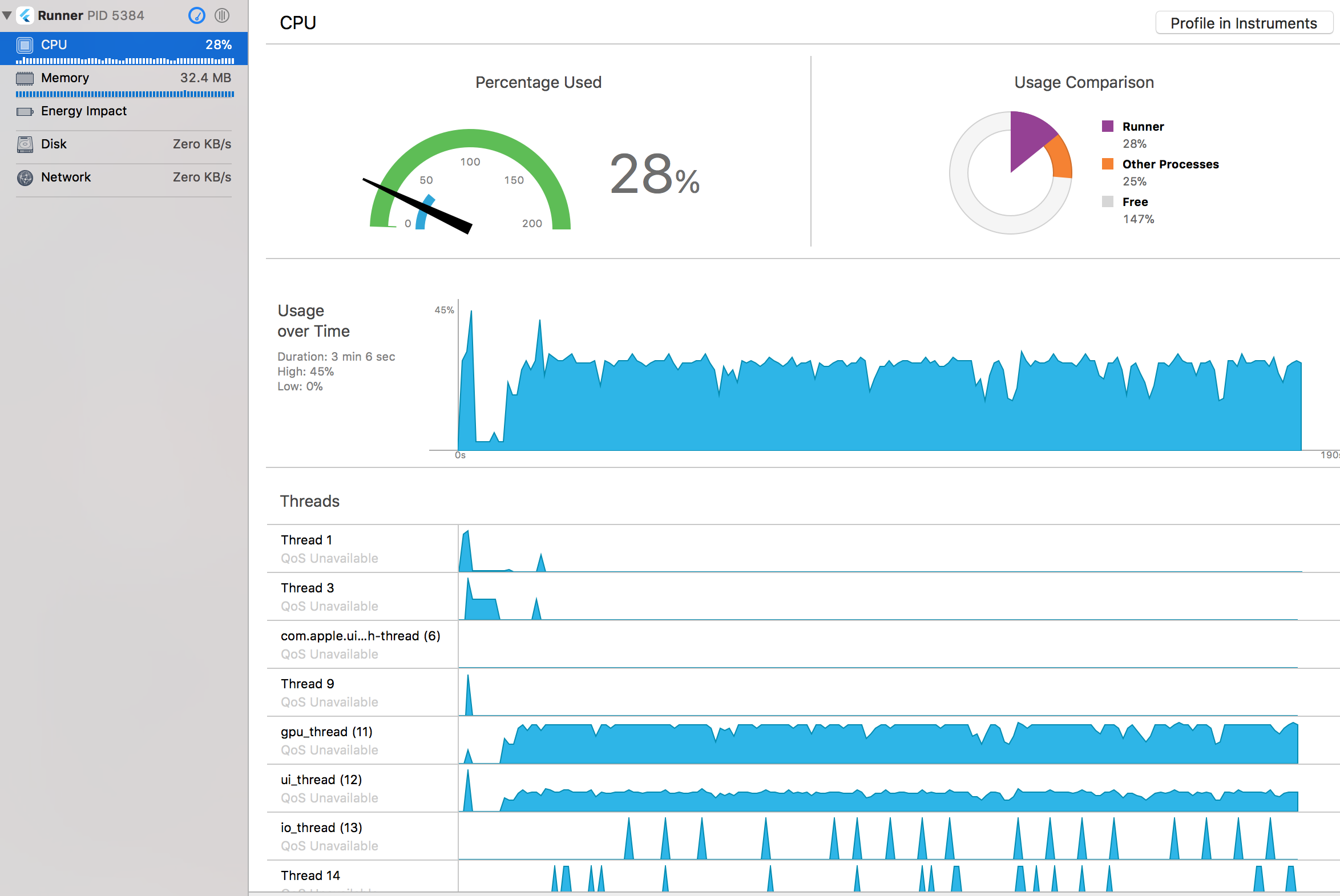 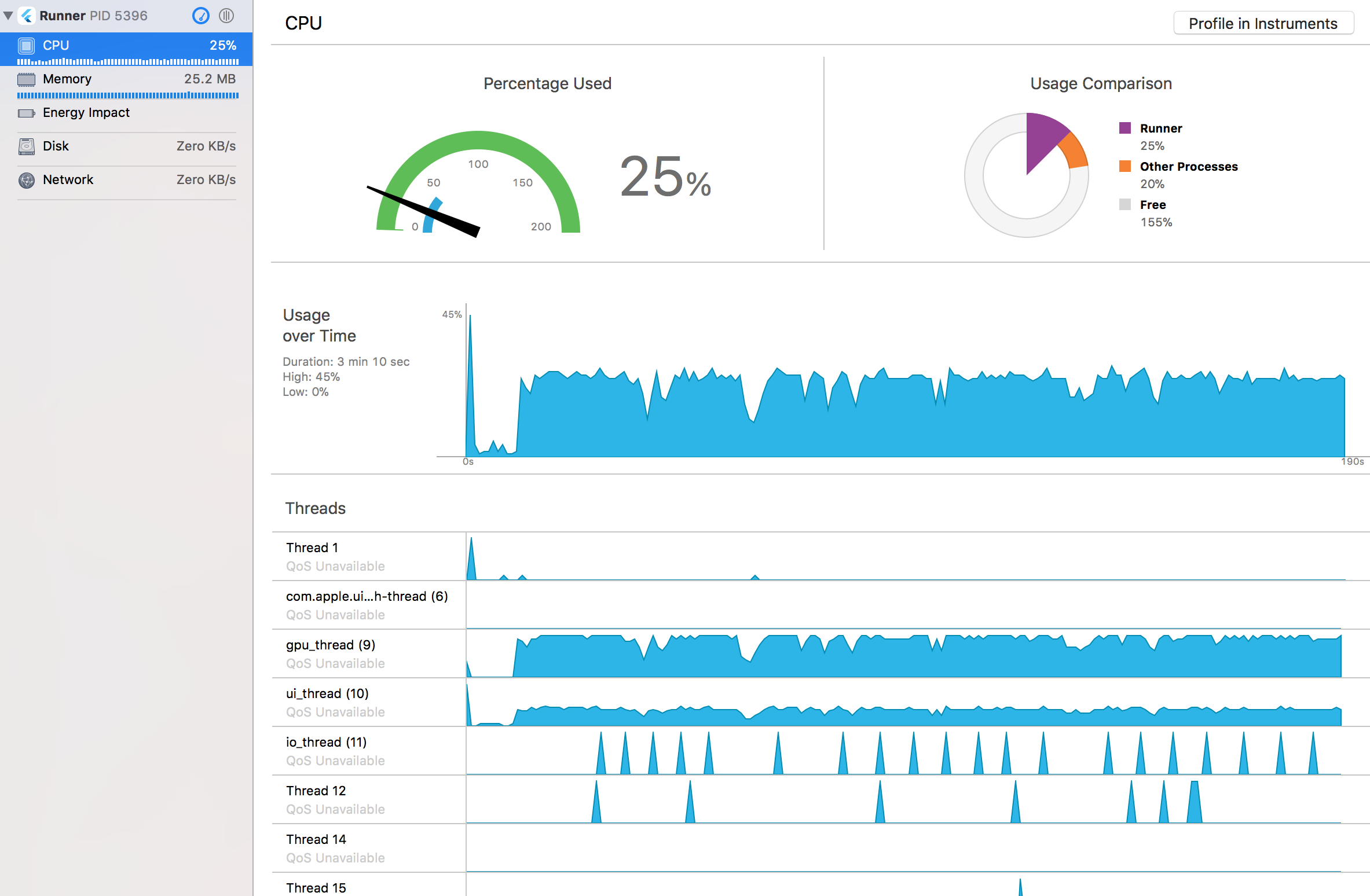 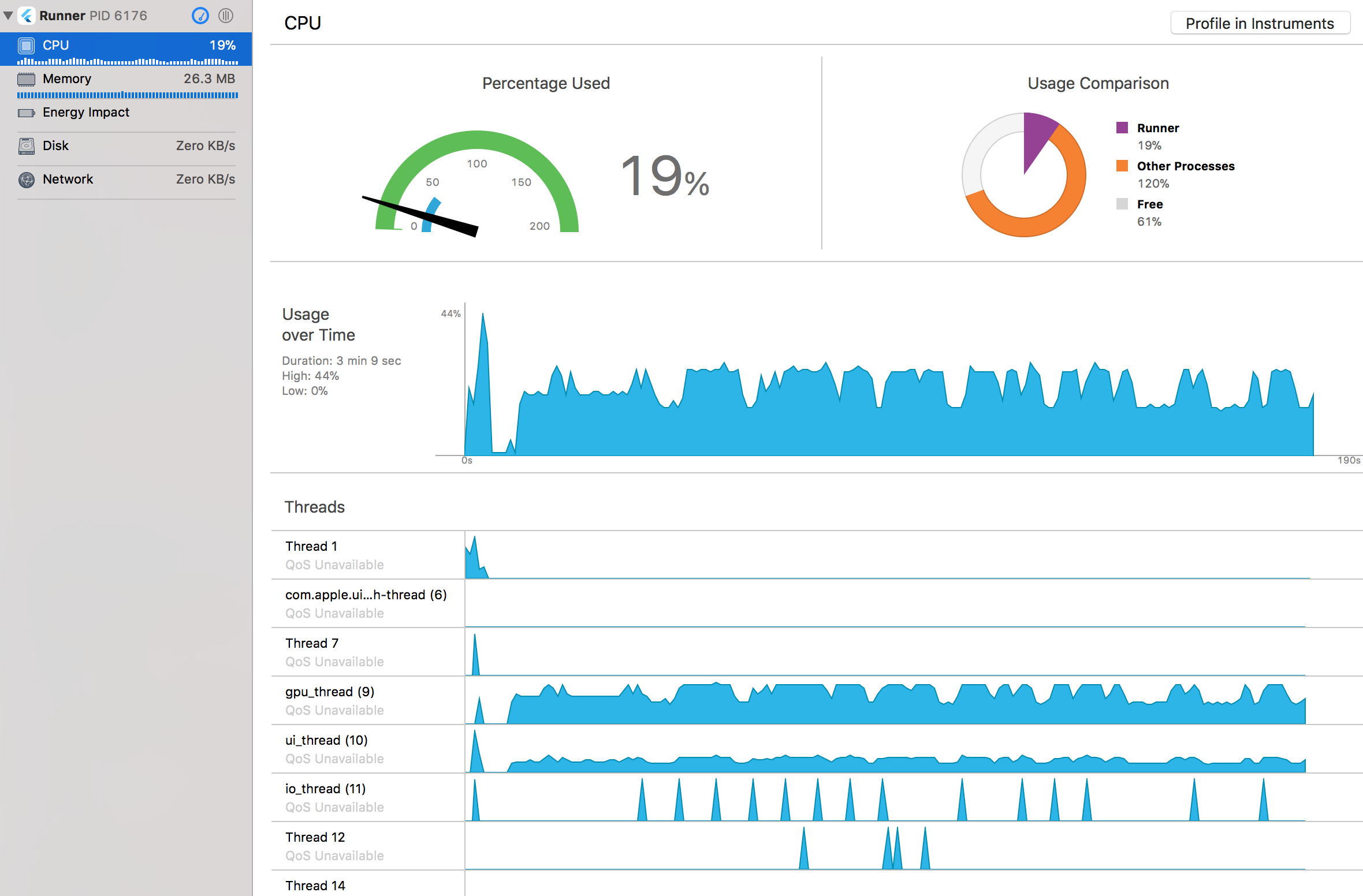 On this last test the CPU usage graph tracks closely the GPU thread, while the UI thread stays fairly constant.

This may point to memory not being deallocated in development mode.

Key takeaway: make sure to profile your apps in release mode.

Note that Xcode reports a very high energy impact when CPU usage is over 20%.

The results got me thinking. A timer which fires ~30 times per second and re-renders a text label should not use up to 25% of a dual core 1.4GHz CPU.

The widget tree in a Flutter app is built with a declarative paradigm, rather than the imperative programming model used in iOS / Android.

But is the imperative model more performant?

To find out, I have built the same stopwatch app on iOS.

This is the Swift code to setup a timer and update a text label every 30ms:

For completeness, here is the time formatting code I used in Dart (optimisation pass 1):

The Flutter implementation is over 3x heavier on CPU, and uses 3x as much memory.

When the timer is not running, CPU usage goes back to 1%. This confirms that all CPU work goes into handling the timer callbacks and redrawing the UI.

This is not entirely surprising.

“Hey!” - I hear you saying. “But the time formatting code is different! How do you know that the difference in CPU usage is not due to this?”

Well then, let’s modify both examples to do no formatting at all:

The Flutter implementation is still twice as CPU-intensive.

Additionally, it seems to do quite a bit of stuff on multiple threads (GPU, I/O work). On iOS, only one thread is active.

I have compared the performance of Flutter/Dart vs iOS/Swift on a very specific use case.

The numbers don’t lie. When it comes to frequent UI updates, you can’t have your cake and eat it. 🎂

Flutter lets developers create apps for both iOS and Android with the same codebase. And features such as hot reloading further accelerate productivity. Flutter is still in its early days. I hope that Google and the community can improve the runtime profile, so that these benefits are carried over to the end-users.

As for your apps, consider fine tuning your code to minimise UI redraws. It is well worth the effort.

I have added all the code for this project on this GitHub repo, so you can play with it yourself.

This sample project was my first experiment with Flutter. If you know how to write more performant code, I’d love to hear your comments.

Sign up for updates and get my free Flutter Layout Cheat Sheet.

Success! Now check your email to confirm your subscription.